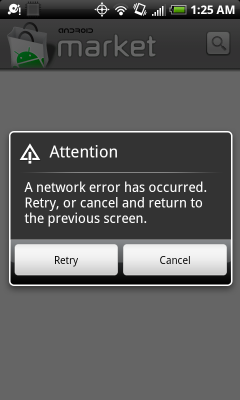 Something took Android Market offline early this morning. With reports from staff members and Twitter, Android Market was unavailable around the world, including Europe, India and North America. Definitely not a device issue, with all devices affected and displaying server errors, it was down late Friday night/early Saturday morning (Eastern time). Users on twitter are speculating (hilariously) either terrorism or elite hackers. It's probably safe to say it's a bit more innocuous than that.

Neowin is in contact with Google to see if we can bring you anything more.

If you had trouble, let us know. We'll be updating this story as it develops.

[Update] The market is back online.