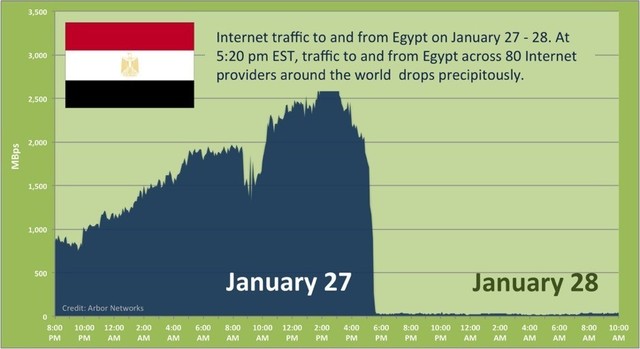 As the world erupted in protest over the Egyptian shutdown of Internet connectivity during the protests of the last week or so, many fail to realize how much this disruption of day-to-day economic activity is actually going to cost the country. According to NetworkWorld, the Organization for Economic Cooperation and Development (OECD) claims that the five day period of little to no Internet connectivity cost the country approximately US$90 million.  This is based on a factor of the total GDP of Egypt, of which Internet services make up 3-4%.

However, that’s just present costs. When a government shuts off connectivity for a couple of days, the overall perception of national stability and reliability of foreign connectivity drops like a rock, setting up unneeded barriers to entry for incoming firms.

This sudden loss of connectivity to an entire country, a heretofore never observed phenomena, will be studied for years to come, as researchers and economists continue to analyze the damage that Egypt have wreaked upon its people, its economy, and its reputation.

Talks of a US kill-switch for the Internet have been making the rounds over the past few months, and Egypt’s sudden and forceful reaction to civilian protests will undoubtedly be used as a political countermeasure against those in favor of giving government ultimate control of the ISPs in an emergency.