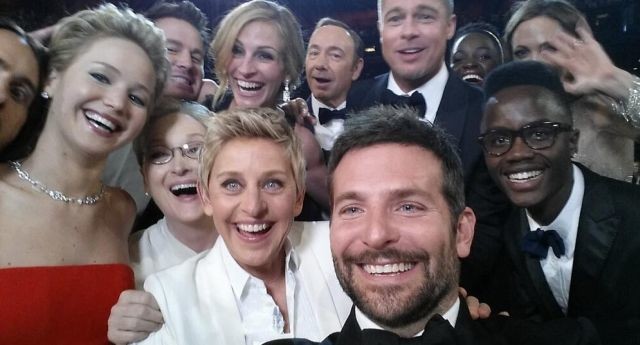 The TV broadcast of the 2014 Academy Awards Sunday night was predicted ahead of time to have a huge impact on Twitter. However, no one expected that the social network would briefly go down thanks in part to one post that has already gone down in history as the most retweeted message ever.

Oscar TV host Ellen DeGeneres decided early in the show to go into the audience at the Dolby Theater in Los Angeles that was filled with major movie actors. She whipped out a Samsung Galaxy Note 3 (in a rather obvious bit of product placement) and got Bradley Cooper to take a selfie of her and lots of other A-list celebrities like Jennifer Lawrence, Julia Roberts, Meryl Streep, Kevin Spacey. Brad Pitt and more.

If only Bradley's arm was longer. Best photo ever. #oscars pic.twitter.com/C9U5NOtGap

DeGeneres then quickly posted that image on her Twitter account and the retweets began immediately. Within minutes the post would set a new Twitter record, blowing away the previous retweet holder which was set in 2012 by President Barack Obama’s “Four More Years” message. That got 781,000 retweets but Ellen's Oscar selfie has already gone over 2 million as of this writing.