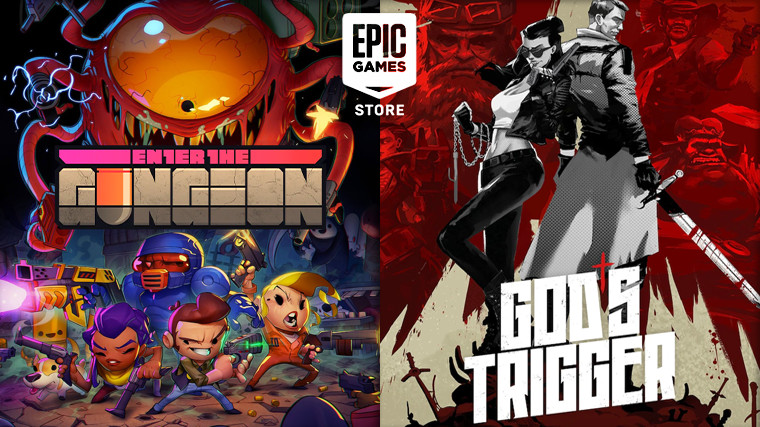 Epic Games Store has put on offer Enter the Gungeon and God’s Trigger for this week’s giveaway, taking the place of Remnant: From the Ashes and The Alto Collection. 3 out of 10: Episode 3 is now also available for free, over here.

Enter the Gungeon is a bullet-hell shooter with rogue-like elements developed by Dodge Roll and originally released in 2017. Epic is giving this one away a second time; it sold over 200,000 copies across all platforms in its launch week, crossing the 2 million mark over the next 3 years. Often compared with The Binding of Isaac, it features a two-player local-only co-op mode as well. Here’s how the Epic Games Store describes it:

God’s Trigger is a top-down rogue-like originally released in April of 2019 to a largely positive reception. It asks for quick-thinking and precision from players as they shoot and blow their way through the numerous obstacles either solo or in split-screen co-op. Here’s how the Epic Games Store describes it:

Slay enemies with speed and precision in an over-the-top show of blood and explosions. Play solo or with others, make split-second decisions, dodge bullets, and use weapons and abilities to inflict violence in the most graphic way possible.

If you wish to claim Enter the Gungeon or God’s Trigger, you can find them over here. They will be free to claim until August 27, which is when Epic will put on offer Hitman and Shadowrun Collection for its next giveaway.