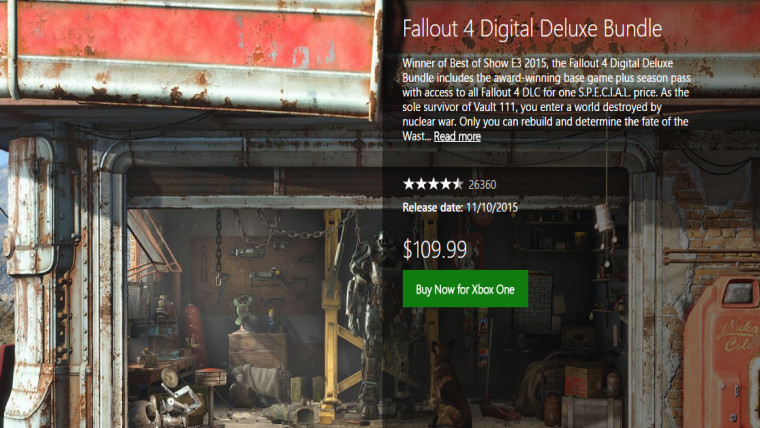 Reports began appearing online that users were able to download the Fallout 4 Deluxe Edition bundle on the Xbox Store for free. However, Xbox Support has now confirmed that the free download was part of a pricing error which resulted in the game being inadvertently offered for $0.00.

The Fallout 4 Deluxe Edition bundle, which is typically priced at $109.99, includes the base game, as well as every single piece of DLC content to date - Far Harbor, Wasteland Workshop, and Automatron - and a Season Pass for all future Fallout 4 DLC.

Many users were able to download the bundle before the pricing error was corrected, but according to Xbox Support, those users will have their licenses revoked as part of end-user licensing agreements with Bethesda and Microsoft. Users who downloaded the Fallout 4 Deluxe Edition bundle will be unable to play the game, and copies of the bundle will eventually disappear from those users' Xbox One libraries.

As some Xbox users have noted, Microsoft had experienced intermittent issues with its marketplace, which displayed errors when viewing certain products on the online Xbox Store. Xbox Support has confirmed that Fallout 4's pricing error was a result of these issues. According to a support specialist we contacted in an attempt to resolve the issue:

"Earlier we had a short maintenance on the server, so it happens that some items on the marketplace have been affected. The issue has been fixed now."

Xbox Support further clarified that under licensing agreements, users who managed to download the game would see their copies revoked, saying:

"Those customers who were able to get the Fallout 4 Deluxe Edition for free will [have the game] be removed under their licenses automatically."

Attached below is a snippet of our conversation with Xbox Support:

Previous users had contacted Xbox Support on the pricing error, and in at least one instance, Support told them that the bundle was being offered for free as part of a promotion "for all gamers." However, the pricing on the Fallout 4 Deluxe Edition bundle has been revised to its original form, and we're able to confirm that the download was a result of a likely inadvertent marketplace error.