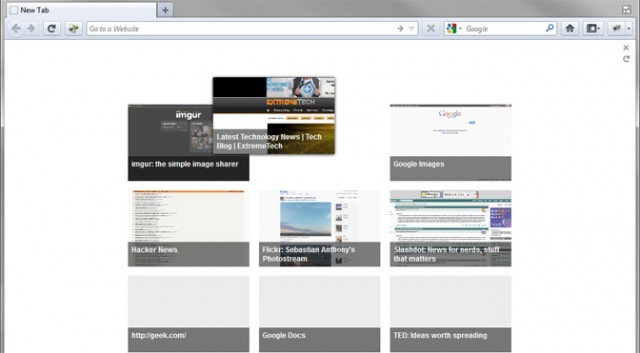 The Firefox web browser is in a constant state of development as the team at Mozilla continue its rapid pace of releasing new versions of the program. Firefox 10 will be the next major version and a beta has already been released. Now ExtremeTech.com reports that an upcoming version of the browser, Firefox 12,  will be adding some new features, including some much requested ones that have appeared in other web browsers such as Google's Chrome.

One of them is a new tab page that will show a three-by-three grid of a user's most visited web sites. Users will also be able to rearrange the grid as well as hide or pin a particular web site on that page.

Yet another new feature is the Firefox home tab. The article states that it will be released in two different phases. In phase one, the Firefox home page will contain launcher buttons on the bottom for various web browser features like bookmarks, downloads, settings and more. The second phase will change the Firefox home page even more with showing recent web sites, one-click access to a user's favorite apps and more.

Firefox 12 is scheduled to go into Aurora testing at the end of January and should be released in its final public for sometime in April.