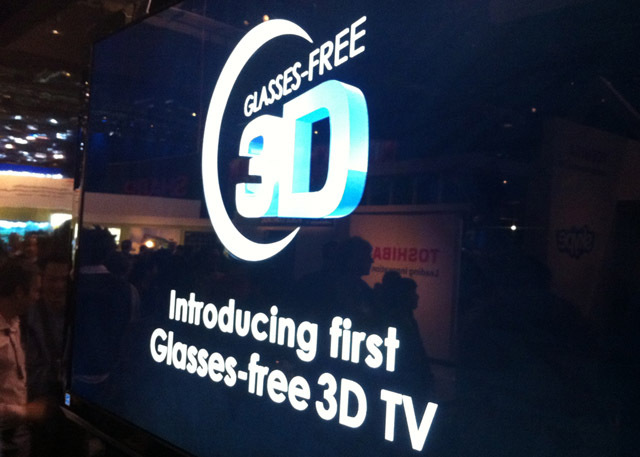 Toshiba is launching their brand new line-up of 3DTV's that don't require the user to wear glasses. Almost every TV maker this year is pushing 3D to consumers this year, but all require the consumer to wear special glasses in order to see the effects.

Toshiba has come up with a solution for this problem, the first big-screen 3DTV that doesn't require special glasses. Toshiba showed off a 56" and 65" 3DTV. Neowin took a tour of the booth today, getting a first hand look at the line-up of televisions.

The 4K prototype LCD 3DTV's have three viewing angles. Yes, you heard that right. The 4K 3DTV only works properly from three viewing angles, which is probably why it's still a prototype. I will admit, the glasses-free 3D really does work, but only at the proper height and if you're looking directly at it.

Toshiba is well aware the 3D only works at three viewing angles, why they had pieces of tape on the floor to stand on, so you can view the 3D properly. As the 3D did work, it required me to stand directly in the center of it, but even then, the bottom, sides and sometimes during motion, there was too much blur to make out details.

One of the demonstration videos was a short cut-scene from Final Fantasy XIII, which actually looked impressive. However, the Xbox 360 version looked a lot clearer on my Sony BRAVIA HDTV (2D) display at home. Toshiba hasn't announced any availability date or prices for the glasses-free 3DTV.

Toshiba isn't just putting this technology into large TV's, but instead it had a whole line of products including photo frames, smaller TV's, and laptop computers.

Because of the 3D and dark lighting, images and video is very limited.