The idea to give PC users a way to donate their spare CPU cycles for medical research has been around for quite a while now. This week, a new way to help fight diseases such as cancer revealed itself with the launch of the Folding@Home App for Chrome web browsers. 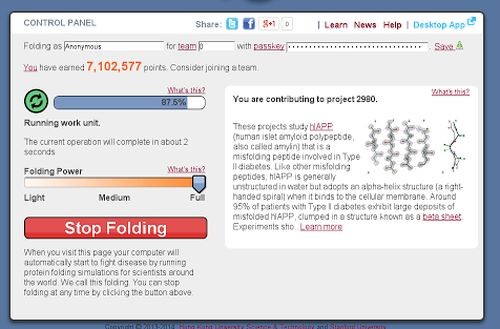 The app is available from the Chrome store and was developed by Google in collaboration with teams at Stanford University and the Hong Kong University of Science and Technology. As with the other Folding@Home apps, the Chrome version accesses unused processor cycles from a PC to simulate protein folding and then sends that information to a computer at Stanford where it will be added to the results from millions of other PCs around the world.

While you could download and use the Chrome app and sent your CPU cycles to Stanford on your own, you could also join Neowin's own Folding@Home team to make an even bigger contribution. Our group is currently ranked 296 (out of 219,666 teams) in the entire world which is pretty impressive. Enter our team number (55186) in Folding@home to add your cycles to Neowin.net's group. You can also check out our Folding@Home thread in Neowin's forums to get more information on our own efforts.