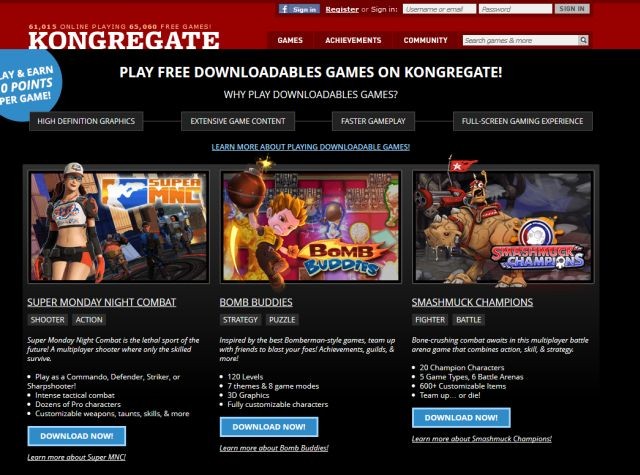 Previous to this week, Kongregate had offered people a way to play indie games via a Flash-based web browser set up. Now, the site is offering three downloadable PC games (Super Monday Night Combat, Bomb Buddies and Smashmuck Champions), all of which are free to play. More such games will be launched "in coming weeks."

Launched in 2006 and acquired by GameStop in 2007, Kongregate now says it has 15 million gamers playing its web-based titles every month. So why add downloadable games to the mix? Jim Greer, the CEO and co-founder of Kongregate, states

Our players are looking for increasingly sophisticated games. Adding downloadable titles brings a new level of gaming to hardcore players looking for high-definition graphics with more options and content to select from.

Kongregate is entering an already crowded field of services that offer free and paid downloadable PC games. Steam remains the leader in this industry but there are other rivals such as GoG.com, EA's Origin service, GamersGate, Green Man Gaming and more.