If you are using a QWERTY English physical keyboard to type emails in other languages, it can sometimes be a pain due to differences in both language and also in characters. Google claims to have come up with a solution to this issue with a new feature in its Gmail service. 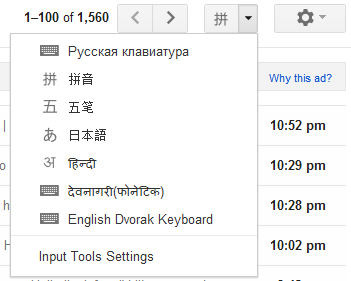 In a post on the official Gmail blog, Google said it has added what it calls input tools in its web-based email service. This allows Google to add "more than 100 virtual keyboards, transliteration and IMEs" into Gmail. Google says, "These tools enable you to type in the language and keyboard layout you’re accustomed to, making it easy to keep in touch with family, friends and coworkers from any computer. You can even switch between languages with one click."

Adding this new feature will let Gmail users chat with others in 75 different languages.

Earlier this month, it was revealed that another new feature added to Gmail can also search inside certain attached documents. So far, Google has yet to reveal this particular feature on its official Gmail blog, but its possible that Google is still rolling it out to all of Gmail's users around the world.