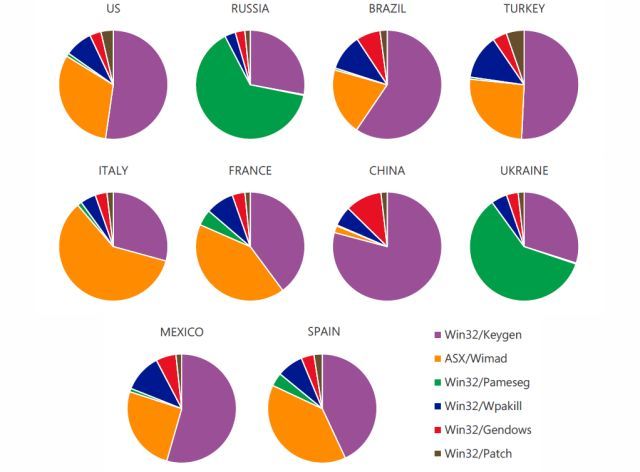 As they do every six months or so, Microsoft today has released a new Security Intelligence Report, which attempts to go over the state of PC security worldwide. Microsoft decided to highlight one part of the report, concerning the rise of malware that are linked with software activation key generators.

In a post on the Microsoft Security blog, the company said:

In the first six months of 2012, the threat family Win32/Keygen, representing software activation key generators, was detected nearly five million times.  Keygen detections have increased by a factor of 26 since the first half of 2010 and today Keygen is the number one consumer threat family worldwide, rising above other prevalent threat families like Pornpop, Blacole, Conficker and FakePAV.

The pie charts above show how much impact Win32/Keygen has had in a number of countries, including the US. Microsoft points out that while key generators themselves are technically not malware, they are frequently tied into actual malware programs.

Microsoft says, "According to the report, more than 76% (that’s approximately 3.8 million of the 5 million aforementioned Keygen detections) of computers reporting Keygen detections in the first half of 2012 also reported detections of other malware families."