Google has released its rumored music service and it's not quite what everyone was expecting. Most were expecting, or wanting, a service similar to what Google offers in China. In China, Google offers free music because piracy has nearly killed all legitimate music sales.

Google has rolled its music service into its OneBox offerings. When a user searches for a song the "simple design brings up to four songs to the top of search results. Once one is clicked on, the song will play on pop-up players from MySpace or Lala. The search results are also accompanied by album art and links to music sites Pandora, imeem and Rhapsody."

The idea is to make searching for music easier by allowing users to listen to the song before traveling away from the search result page. This is a clever move by Google as it allows them to retain users longer on their page and also allows them to sell links to music offering services to increase their bottom line.

"After clicking on a song...a music player will pop up... to play it in full at least once, with an option to buy song downloads from Amazon.com Inc. or Apple Inc.'s iTunes.

Users who try to listen to the same song again may get only shorter previews, though the full-length songs along with videos, tour dates, and ticketing and other band information remains available by clicking through to the MySpace or iLike Web sites."

The service remains US only for now but will most likely be expanded as other partners are brought on board. 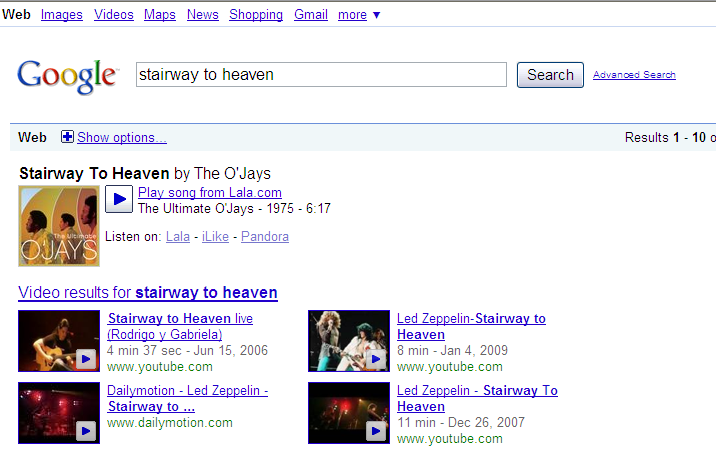 Thanks to ManiD for the tip!