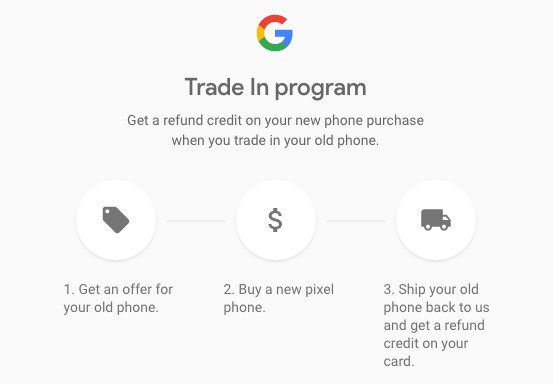 It was rumored to be coming but Google has now let its trade-in program go live in full, giving users a new way to purchase handsets from the company.

In order to take advantage of the trade-in offer, you'll want to start your purchase, at which point you'll be presented with an opportunity to trade-in your current device. Unfortunately for consumers, the selection of devices that the firm is accepting at the moment is quite slim. Although Apple, LG, Samsung, and a few other major players are represented, it looks like Google is only accepting the latest hardware from most. For example, when it comes to Samsung, the firm is only accepting the Galaxy Note 5, Galaxy S7, Galaxy S7 edge, Galaxy S8, and S8+.

If you're looking to try and get the most for your device, you'll probably want to steer clear of the Google Store as the quotes being offered are quite low but are in line or a bit better than others. As an example, if you were to trade-in the Galaxy S8+, you'll be looking at a maximum of $290. If you're looking to get the most, you may want to consider an alternate option that will actually allow you to sell the handset.

Once you have secured your trade-in quote, you'll be able to continue your transaction, and will be sent a mail-in package for the phone. When it is received and everything looks proper, Google will credit you the trade-in value of the device to your purchase. While it may sound simple, things like these can always get a bit complicated, so there is a bit of caution that should be exercised when taking advantage of programs like this. But if interested, you can always head to the Google Store page and start your transaction.