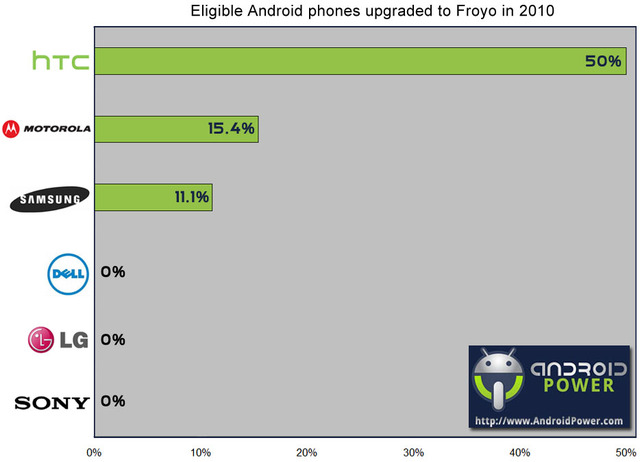 Android fragmentation has been all the rage in the last several weeks. Literal rage, that is. Users have often complained of the scattered updates between manufacturers, mobile carriers, and devices. But now, Computerworld is helping would-be Android adopters choose mobile manufacturers and cellphone providers a tad more wisely.

In an analysis, Computerworld's Raphael studied the four main US carriers and the major cellphone manufacturers in how quickly they issued updates of Android 2.2, or Froyo, to their devices. He used June 23rd (the launch date of the 2.2 code), unless the phone was released after that date, until the end of December as the testing period. Also, devices with Froyo preinstalled were not used in the study.

What Computerworld found was that 50% of HTC devices were upgraded to Froyo at an average upgrade time of 56 days. Motorolla was second-best at 15.4% but upgraded its devices a little bit faster at an average of 54.5 days. Samsung came in at more than 11% of its devices upgraded, while Dell, LG, and Sony were dead last at 0%. Though, Computerworld conceded, staying that at least Dell and LG have publicly stated that some of their devices will receive a Froyo update; Dell even alleges that the Streak will be upgraded this month.

When evaluating carriers, they found that Verizon was at the top with more than one-third of their devices having received a Froyo update in less than two months of release. Sprint wasn't too far behind at 26.6% but took on average more than three months to push out an update, while T-Mobile trailed along at 12.5%. Meanwhile, AT&T was in a definite last-place at 0%. In fact, Dell blamed AT&T for not pushing a release to the aforementioned Streak.

In summation, Computerworld concluded that the best way to be sure you'll receive the latest Android updates is to, for one, choose a popular handset but it probably wouldn't hurt to get an HTC device on Verizon.