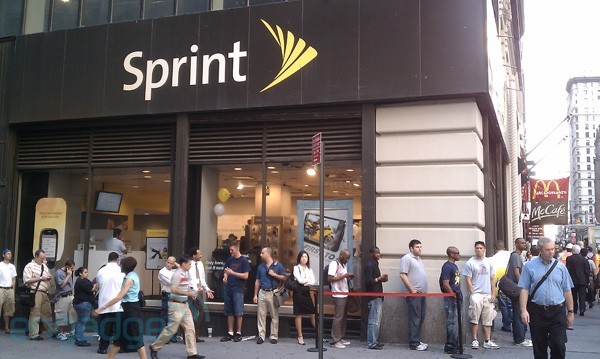 It's no iPad, but HTC's EVO 4G has broken a Sprint record for the biggest opening day of sales of any mobile device. Sprint isn't going to let us know the exact figures, but did say in a press release that it sold 3 times more EVOs in its first day than the Palm pre - the previous record holder - and the Samsung Instinct sold in its first three days. While the Palm Pre didn't fare so well after enjoying its fantastic launch day, it was a huge sales accomplishment for Sprint while it lasted. Following relatively close behind the market failure that was the Palm Pre, the apparently wildly successful launch of the EVO 4G is a big win for the underdog carrier, who has been lacking a real blockbuster phone, like AT&T's iPhone or Verizon's Droid. The huge demand on Friday caused activation problems, according to Engadget, as Sprint servers buckled under the pressure, and shortages have been reported all over the country.

The HTC EVO 4G is the first mobile phone to feature Sprint's Clearwire Wimax 4G technology, greatly increasing data rates wherever there is coverage. While 4G coverage is still relatively limited, and doesn't cover major cities like New York, the EVO is drawing crowds for other reasons as well. It's 4.3" capacitive touch screen, dual cameras (8MP on the back and 1.3MP on the front), and HDMI out, are only some of the some of the features that put this phone above many others in terms of specs. Expect to see sales level off after Apple announces it's new iPhone at their WWDC keynote today, but it's safe to say that the HTC EVO 4G looks like the phone to beat this summer.