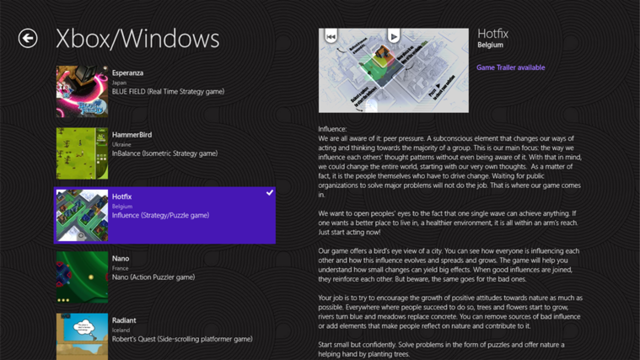 If you are a regular reader of Neowin, you know that one of our editors, Brad Sams, recently went to Australia to attend the 2012 worldwide finals of Microsoft's Imagine Cup student competition. He did an excellent job in covering the event, along with getting some interviews with Microsoft and Nokia executives.

If you want to learn more about the Imagine Cup 2012 finalists and you have the Windows 8 Release Preview installed, there's now an app for that. A few days ago, a free Windows 8 Metro app was launched in the Windows Store that covers all of the finalists of this year's competition.

Perhaps the most interesting thing about this Imagine Cup app is that it was not actually developed by Microsoft itself, at least not in an officially capacity. The app listing shows that it was made by Andrew Parsons, who does work at Microsoft and has been an active Imagine Cup organizer. You can check out his blog for more on his activities.

The Imagine Cup app that was released offers information on all of the people and teams involved in all eight of the event's competitions. It seems to be really extensive. While technically it's not an official Microsoft app, the company did authorize the app to be released for the Windows 8 Release Preview.