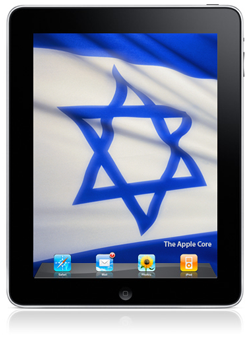 The iPad has finally found a distributor in Israel. When the iPad was launched, it was found that the device was in violation of Israeli wireless laws, and thus its import was banned in the country. The ban was later lifted and some stores imported the device "unofficially" and without support.

Now, iDigital Ltd is selling the iPad in Israel. Some reports state that only the Wifi version will be available, while another states that the 3G device will be sold as well, but come carrier unlocked as no mobile provider is selling the device as of yet.

The devices previously imported as "personal imports" ran approximately NIS 3,000-4,000 or $830-1,110 USD while the new devices will be priced at 2,500 NIS or $695 USD. The original Israeli source is optimistic that mobile carriers will offer the device as well, allowing for subsidization on contract.

The officially imported device will carry the recent Hebrew update to iOS for iPad, as the previous "Personal Imports" were only available in English or other official iPad languages.