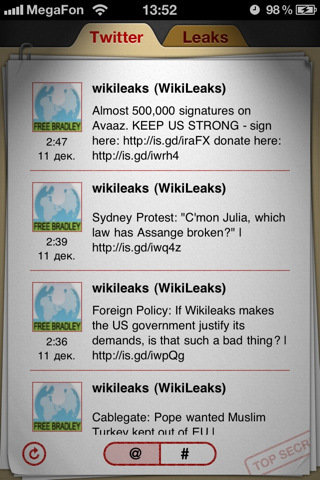 TechCrunch reported that the WikiLeaks App by Hint Solutions had disappeared from the App Store earlier today. The app's developer, Igor Barinov, confirmed the removal via Twitter by posting a screen grab of his iTunes Connect account which showed Apple had taken the app down.

According to the app's official description, now only available via Google cache, the US$1.99 app gave ''instant access to the world’s most documented leakage of top secret memos and other confidential government documents.” Despite the over-the-top description, the app only provided access to information that would have been available to any web user who visited the WikiLeaks website, and did not offer any kind of ''inside access'' to leaked documents.

No reason was given for the removal, but TechCrunch writer Alexia Tsotsis pointed out that the app was charging for information that would otherwise be free, which may have violated Apple's Terms of Service. In a comment on the TechCrunch story, Mr Barinov disputed that argument and claimed his app was intended to raise funds for WikiLeaks rather than charge for access to its content.

''Main idea of semicharity is to collect "white" money to support grey stuff. And from every 1.99$ - 1$ will go to @wikileaks, 0.6$ to fruits company (obligation), and last to cover development costs and to support other free internet projects."

A few hours later, Mr Barinov said via Twitter his app had been downloaded 4434 times and he would therefore be donating US$4434 to WikiLeaks. According to sales statistics also provided via Twitter, the app made around US$5430 in profit during its four days on the App Store.