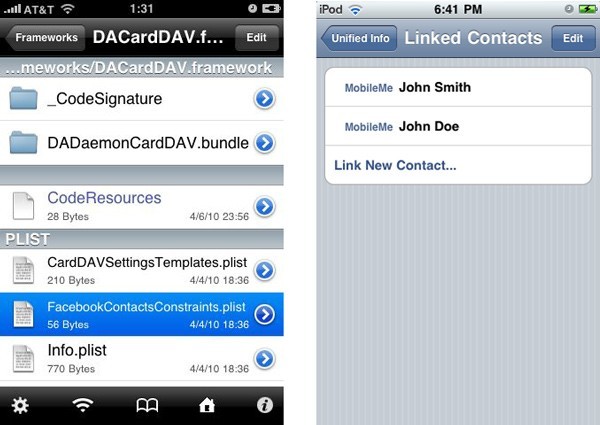 Engadget has unveiled a new look at social networking on the iPhone OS 4.0.  The files were discovered on a jailbroken iPhone running the 4.0 SDK, which found native Facebook integration built into the phone.

It’s hard to tell exactly what the feature does, or even how it works right now, but the file system shows support for linking contacts with Facebook to your contacts on your phone.  The Facebook app already allows photo syncing with contacts, but this will now be integrated into the phone.

With built in Facebook sync, this could open doors for users to universally sync with Facebook calendar and events with their iPhone.  Although no evidence of Twitter or any other social network integration was found, the possibility to include more services maybe feasible in the future.

The iPhone OS 4.0 is set to be announced on June 22, along with what many believe to be the next iPhone 4G/HD.