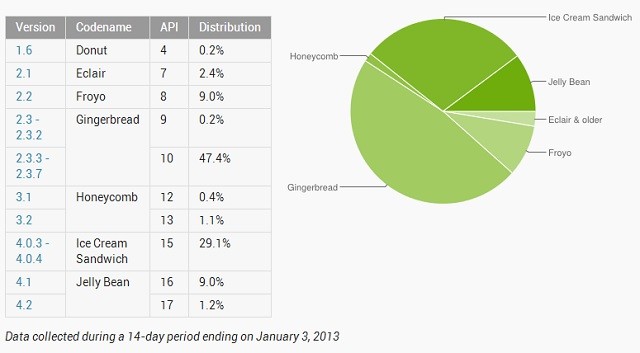 The reports are in from Google, and it appears as though the market share for Android 4.1 and 4.2, otherwise known as "Jelly Bean", has risen to over 10% of the total active devices. This can be broken down into 9% running Android 4.1 and 1.2% running the latest version (4.2); the former populated by updates to devices such as the One X and Galaxy S III, while the latter restricted to the Nexus line.

The interesting thing here is that if you take some readily available information about the overall market share of mobile devices, it looks like the share for just Jelly Bean has surpassed the entire market share of Windows Phone. There are around 125 million Android devices worldwide, meaning that Jelly Bean is loaded on roughly 12.5 million devices; in total, Windows Phone only has around 5-6 million devices in users' hands. Even though the data we're using here is a few months old, it still paints an interesting picture.

Google and their Android OEMS are notoriously slow at delivering updates to devices, which can be seen by the whopping 47% of devices still using Gingerbread (a version released in early 2011). However, they've still been able to push a relatively new version of the software into consumers' hands faster than Microsoft has been able to push out Windows Phone to the masses (in the form of sales) across the lifetime of the OS.

In the end though, it's simply an interesting, but meaningless statistic. Windows Phone still has a way to go before it's widely adopted, whereas Android continues to flourish in all corners of the globe.