Microsoft's Malware Protection Center continues to monitor Internet threats from cyber criminals and the division recently announced that it will have new criteria for what it considers adware on July 1st. Today, the center has issued an update to its Security Intelligence Report and its leader, Holly Stewart, talked to Neowin by phone earlier this week about two threats that have increased under its watch in the past year. 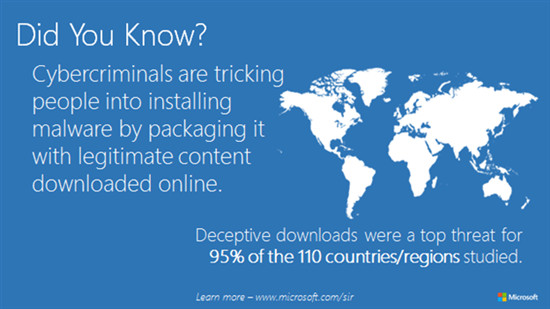 Deceptive downloads, which try to mask malware by hiding in software that appears to be benign, are on the rise. Stewart told Neowin that the amount of PCs that had to be cleaned of malware due to deceptive downloads more than tripled in the last quarter of 2013. The Rotbrow family of malware is the one that has been used most often in this kind of delivery system. 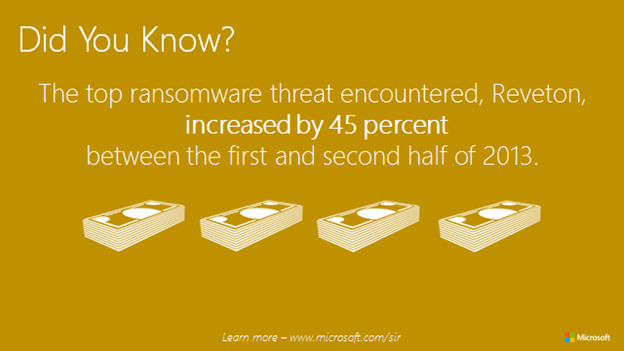 While not as prevalent as deceptive downloads, Stewart told Neowin that ransomware is also on the rise. That's where a person surfing on the Internet might encounter a website that claims to be from a government agency and says that the user has violated the law, but can get out of it by paying a fine online. These kinds of pages are, of course, fake. Stewart told us the biggest ransomware family is Reveton, which increased by 45 percent on the Internet between the first and second half of this year.

Individuals and businesses can fight off both deceptive downloads and ransomware on their PCs by taking common sense precautions, according to Stewart. That includes keeping their software and antivirus definitions updated, use the most recent software available, only download products from a trusted site or vendor, back up files regularly and, of course, "think before you click."

There was some good news to report this week. Stewart told us that between 2010 and 2013, the number of severe vulnerabilities that had been exploited in Microsoft's software products has actually decreased by 70 percent. The full report is available for download at Microsoft's website.