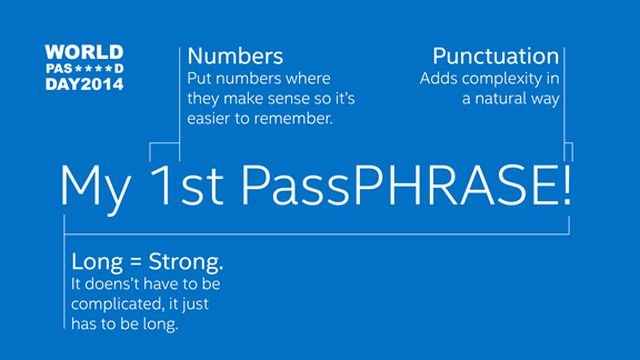 Microsoft is joining with a number of other big technology companies such as Intel, Samsung, Acer, Toshiba to support and celebrate the 2014 edition of World Password Day. The idea is to help educate people about the importance of creating strong passwords for their various Internet accounts.

As we have reported before, the most used password in 2013 was "123456". Obviously, that can be quickly cracked by hackers. The organizers of World Password Day state that 90 percent of all passwords that are in use are vulnerable to hacking. It also claims that one out of five Internet users have had either an email or social networking account taken over by hackers.

Even a complex eight character password can be hacked in just 5.5 hours, according to the companies behind World Password Day. They recommend length over complexity, using a phrase like "thunder showers at sunset". Of course, people can also change their passwords regularly to make them less vulnerable. The group's official website has a number of tools to help educate people about creating strong passwords. Last year's World Password Day got folks around the world to change one million of their passwords.