Often you'll find that Microsoft has some interesting ideas for what it wants to put into their smartphone technology, and occasionally this tech makes its way into a patent filing. Way back in July 2011 (and only made public today), Microsoft filed a patent for an interesting "inconspicuous mode" for smartphones, which appears to remove many of the distractions of the "standard" mode to be "less obtrusive". 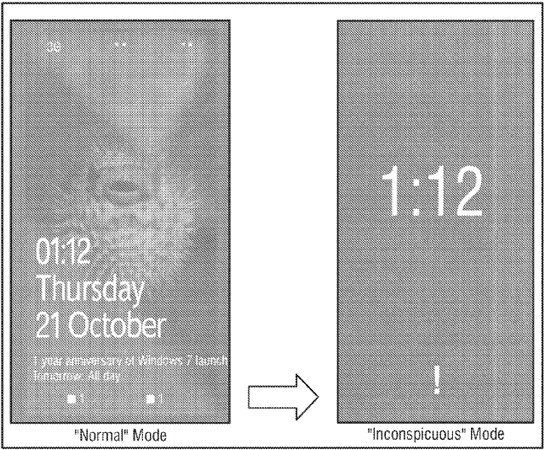 The unsurprisingly complicated patent filing describes a system where, when the phone is placed into inconspicuous mode, the screen brightness may be dimmed, sound events may be disabled, and information/notifications could be removed from view. The patent references a scenario where you may be in the cinema, and to prevent disturbing other cinema patrons, you would enable this inconspicuous mode.

Apart from manually enabling the mode, the patent also describes how the phone could use various sensors to automatically turn it on; for example it could use the ambient light sensor to sense when the phone is in a dark room, after which it enables inconspicuous mode. The homescreen or lockscreen may feature simply the time on a dark background, removing other distractions from view.

Now this is just a patent filing which doesn't appear to have been accepted just yet, and even then it's still unclear if this sort of mode would ever make it into a future mobile OS. The images, such as the one above, definitely depict Windows Phone as using the inconspicuous mode, but again there's no guarantees we'll ever see it in the flesh.