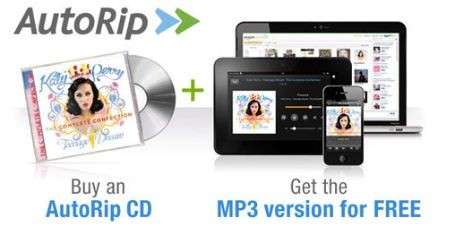 Kids, sit back and let me tell you a story about how music was in the good old days. Before iPods, Spotify, and satellite radio, we used to buy our music on thin, shiny disks called “CDs.” They could store a whole 650 megabytes of data, which was good for 60-75 minutes of music. And best of all, we didn’t have to worry about rewinding tapes or scratching records anymore! Life was good. But now all of your music is digital and you don’t have anything to hold, no liner notes to read, no artwork to enjoy.

Although the CD isn’t dead yet, it’s definitely on a downward trend as digital music continues to grow. While Amazon won’t be reversing this trend, they’ve just announced a service, called AutoRip, that may give people pause when deciding whether to purchase physical media or a lossy digital file. When you purchase a CD from Amazon, the company will also automatically put a digital copy in your music cloud. The best part is that this isn’t a “from now on” type of service: Amazon went back in time and “ripped” any CD you’ve purchased in the past too. In addition, music ripped in this way doesn’t count against your total storage allocation either.

With this move, Amazon is clearly hoping to better leverage their cloud offering and given the company’s long history and the fact that people have probably purchased dozens, if not hundreds of CDs from them over the past 10-15 years, it’s a strategy that could pay off long term. We also wonder if Amazon will soon do something similar for people who have purchased books: Could free Kindle versions be available soon? Time will tell.