Since Windows Phone 8.1 was announced earlier this year, Microsoft has launched three new handsets running its mobile OS: the flagship Lumia 930, the more affordable Lumia 630 (and its 4G-enabled 635 variant), and the ultra-low-cost Lumia 530. But we've also known for some time that it has at least two new Lumia devices on the way, and their launch may be coming soon.

Today, Microsoft sent out press invites for an event to be held at the IFA Berlin consumer electronics trade show on Sept. 4. The only clue as to what the event might be for in the invite is a camera lens. 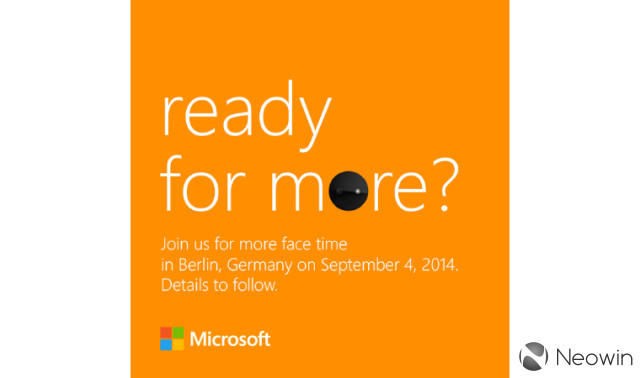 Unless Microsoft is trolling us - and let's not rule anything out here - there's a pretty good chance that that camera lens gives a hint at what's on the way. There are two upcoming Lumia devices rumored that could potentially align with that camera-themed clue.

The first - and the most likely - is the Lumia 730, known also by its development codename 'Superman'. This device has also come to be known as the 'selfie-phone' in Microsoft's Nokia range, due to its high-resolution 5MP front-facing camera. This makes it an obvious fit with the clue on the invite, especially given that the second line of the invite says "join us for more face time."

The second device is the Lumia 830, known also as 'Tesla' or 'Train.' We reported earlier this month that the Lumia 830 is headed to AT&T, and earlier today, it emerged that the device will feature mid-range specs with a 4.5-inch HD display, but will also include a 20-megapixel camera - perhaps the same unit used in the top-of-the-range Lumia 930/Icon and Lumia 1520. A mid-range phone with a high-end camera could also fit with the camera theme of the invite, although it ties in less well with the 'face time' reference.

Either one - or perhaps both - of these devices could be announced at IFA next month (although our money is on the 730). Or Microsoft may surprise us with a different announcement entirely. Only a few weeks until we know for sure.