With the World Economic Forum starting in Davos tomorrow, Microsoft has published a report on people’s views on technology and the internet around the world. In shocking news the report found that a majority of people believe the internet and technology are good things and are having a positive impact on the world.

Of course, while that conclusion is obvious, especially for our readers, the report does dive deeper into the data and highlights some recent trends and changes taking place in the digital world.

The over 12,000 people polled, coming from 12 countries including: USA, France, Japan, Germany, South Korea, Brazil, Russia, China and Indonesia have overwhelmingly agreed that their lives are indeed better thanks to the internet and personal technology. 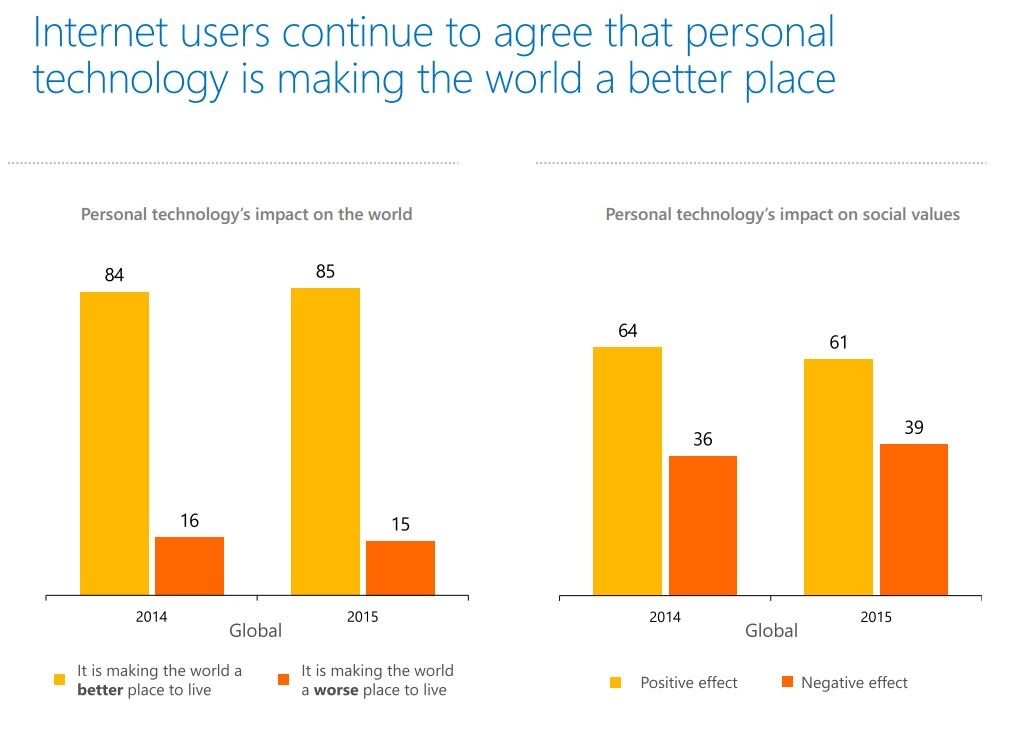 However, fears with regard to privacy and online security have grown nearly 5% compared to last year – an obvious response to recent events. What’s even more interesting is that despite an overall positive attitude, there seems to be a growing divide between developed and developing nations.

Social Activism, better online shopping, increased productivity are all viewed as being made better with the aid of the internet but social bonds, trust in traditional media, and impact on children are divisive topics amongst the respondents.

The clear trend is that those in developing nations believe that their social life, level of health and fitness, children’s knowledge, education and opportunities and the sharing economy as a whole are growing and becoming better thanks to technology.

Those in developed countries on the other hand believe that trust in the media has been eroded, that traditional companies were better for consumers and that children should have less access to technology.

If that sounds backwards and reactionary it’s because it is. Perhaps the most striking example of a changing landscape comes from the interest in STEM and gender equality in these fields. A majority of respondents believe that the best new jobs will be coming via STEM fields. However 85% hold that opinion in developing nations while barely 50% do in developed ones.

Finally 77% percent of women respondents said they felt encouraged to join and learn in STEM fields in developing countries, while that number drops down to only 46 percent in developed nations.

And that right there, in a nutshell, is why the world economy is changing.