Microsoft renamed its free Office Web Apps collection to Office Online in February and today the company announced the first update to their browser-based software since the branding change; the updates will begin to roll out later today. 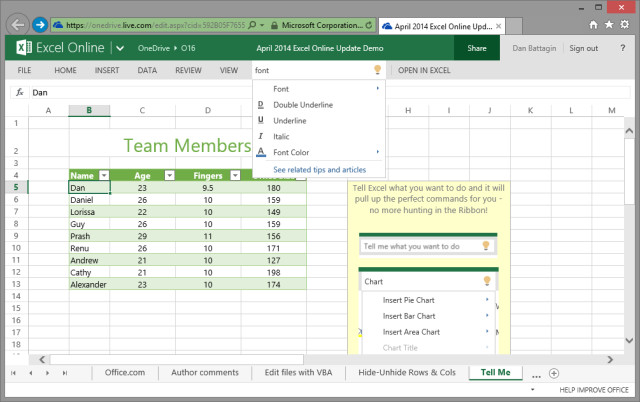 The Office blog reveals that Excel Online now has Tell Me support, which allows users to ask the program how to do something. The feature will then bring up a list of suggested commands in a drop down menu, as shown in the screenshot above. Excel Online also now lets users add, edit and delete comments, along with a way to "open and edit VBA-enabled spreadsheets without removing (or corrupting) the VBA contained in the file."

Word Online users can now edit comments, along with letting them insert footnotes and endnotes inline; list making in the program has also been improved. Microsoft says, "For example, when you’re making a list, if you’re directly below an existing numbered list and start typing, your next line automatically becomes part of the list—just like in desktop Word."

PowerPoint Online will now allow users to see how their slides will look in close to their final form editor during the editing stage. The advancement of slides has been improved and it also now supports playback of embedded YouTube videos. OneNote Online finally adds printing support for the first time, along with multi-column section or page navigation.

Finally, Word Online, PowerPoint Online and OneNote Online are all now available for Chrome web browser users to download from the Chrome Web Store; Excel Online will be added to that storefront in the future.