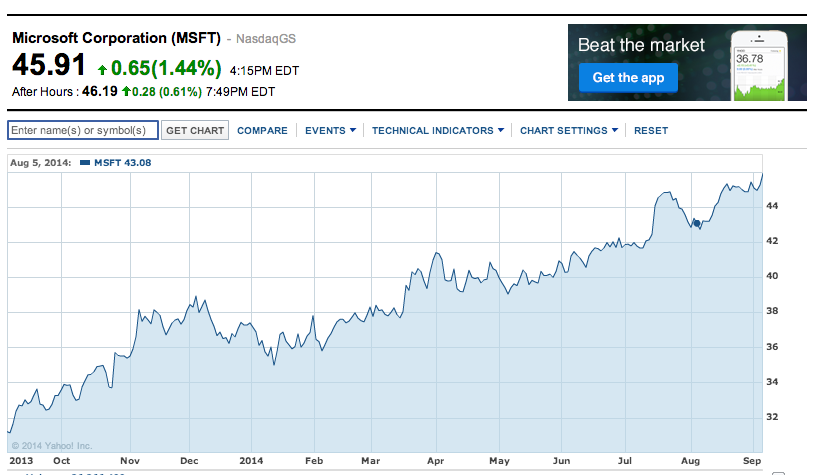 The stock market is a tricky beast. While daily movements in share prices often defy conventional logic, broader trends are generally representative of the confidence that the markets have in a company. With that in mind, Microsoft's stock has hit a 52-week high today, coming in at $45.93 at the time of closing, suggesting that Wall Street appears to approve of new CEO Satya Nadella's direction for the company.

Today's mark is more than just a 52-week high, however: this is the highest price point for Microsoft's stock since 1999, when it hit $58.71 a share. While it's hard to pinpoint an exact reason why the company's stock is doing so well at this time, it could be a couple of factors. The less likely (but still slightly plausible) reason is that Wall Street likes the new Lumias that were announced at IFA this week. What is more plausible is that the rumors of the upcoming announcement of the next version of Windows at the end of this month could be moving the needle forward.

Wall Street (and frankly just about everyone) knows that Windows 8 isn't selling well, and with Windows Threshold, Microsoft gets to reset the sales dial to see if a new version of its flagship operating system will resonate better with their customers.

Whatever the reason, and the story is likely very complex, Microsoft's stock is doing quite well at the moment and has showed no indication that it is done climbing.

[Update] An incorrect year was used in the post, updated to reflect correct time period.