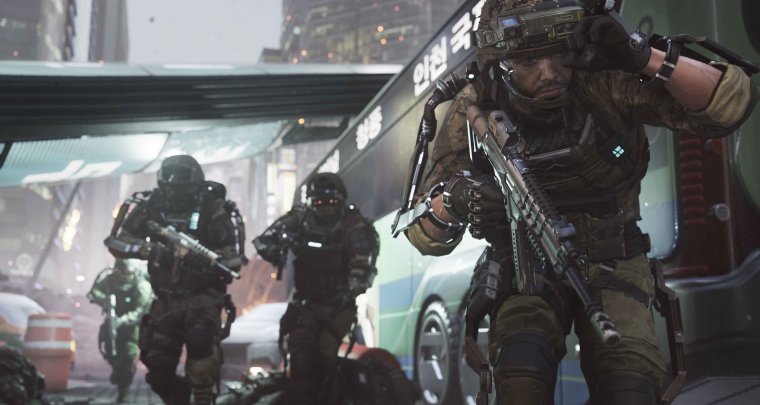 Call of Duty has become synonymous with the word “recycled” and has garnered more than a few words of hatred from its own community.  The once-hyped shooter that kicked Halo off of its long-ruling throne had fallen off of its own, leaving many would-be players sour and feeling ripped off year with every sequel release. This year will be different.

Developer Sledgehammer Games is taking the helm in a brand new addition to the Call of Duty franchise, titled “Advanced Warfare.” The aim: shake up the Call of Duty formula without completely alienating the core audience. To do that, Sledgehammer is shying away from the Michael Bay tactic, aka “Baydom,” of trying to create an overly dramatized play-through of a storyline and finding ways to create a more dynamic experience through the campaign and multiplayer portions of the upcoming game.

From what we’ve seen since the game's first announcement and demos at E3, Advanced Warfare seems to borrow from other high-profile shooter series such as Titanfall and later Battlefield entries. Maps will have meaningful event triggers that either alter the landscape somewhat or entirely, such as a massive wave crashing onto a beach and flushing out all the small canyons or caverns that sit up against the beach. Be in the wrong area at the wrong time and you'll end up dead.  A prison-based map has player tracking lasers that were once meant for prisoner identification but can be exploited by a team to track their enemies. The bottom line here is these are real map-specific encounters that don't come off as half-baked.

The new exo-suits used in Advanced Warfare will give players the ability to jump higher, strafe from side to side quickly (even in mid-air) and even use special abilities (like cloaking) to give you more ways to gain tactical advantages over your enemies. These same exo-suits give the player a familiar mobility that you’d experience when playing as a pilot in Titanfall. This new suit will allow you to reach places that otherwise would have been off-limits had these locations been playable in previous Call of Duty titles.

Seldgehammer is showing off a new promo video previewing some of the multiplayer features of Call of Duty: Advanced Warfare.  The game is set to launch on November 4, 2014.  With all the changes and improvements coming our way, it looks like Advanced Warfare is taking Call of Duty in a very positive direction.  What do you think of all the features and gameplay footage you’ve seen since the initial Advanced Warfare?