As promised, Microsoft has now launched MSN Video Player, its latest venture into the video on demand market.

MSN Video Player is now available as a free online beta to those in the UK. MSN Video Player is available exclusively in the UK and offers over 300 hours of free content from both BBC worldwide and producer All3Media, responsible for shows like peep show and shameless. Microsoft is running a 6 month trial of the player during which time Ashley Highfield, Microsoft's managing director and vice president of consumer and online, claims that the company has sold out of its advertising space to fund the MSN Video Player.

The idea behind the video player is not to compete with the BBC's iPlayer or Channel 4's OD but to complement the services and offering backdated programming. In an interview with the BBC Microsoft's Highfield claims "we cover everything from a few months ago to a few years ago. This is bringing all the programs together in one place. It's going to be a one stop shop for recent and older classic British television."

Programs are currently streamed in Flash and it's rumoured that Microsoft plans to use Silverlight in the future. British viewers can currently choose from classics like Peep show, Bottom and Shameless. 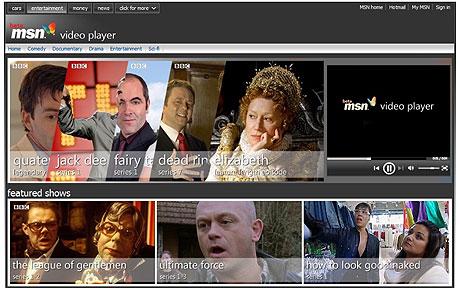