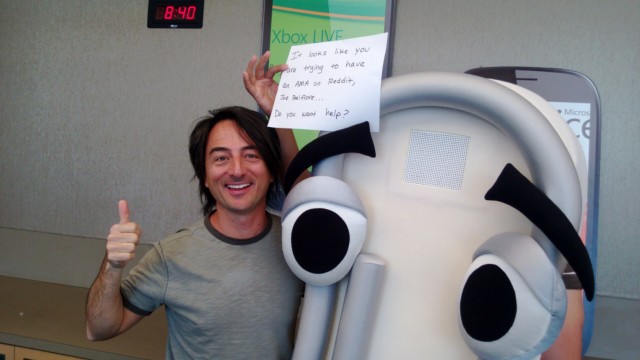 Joe Belfiore has historically been one of the most open people on Microsoft's executive team and that didn't change today as the leader of the Windows Phone team answered a bunch of questions from Reddit users during his AMA session.

During the chat, Belfiore confirmed plans for an upcoming File Manager for Windows Phone 8.1, promised new and big updates for the Facebook and Skype apps, made some hints about a PC version of Cortana, and mentioned they were in talks about getting an official Windows Phone Snapchat app.

However, that's not all he wrote about for the Reddit audience. Here are just some of the highlights from today's AMA:

On the delay in offering Windows Phone updates to developers

Belfiore denied that Microsoft had broken promises in terms of rolling out updates for Windows Phone app developers ahead of wireless carriers. He said:

Last summer we said we'd enable developers to get updates separately from the carrier-approval process. It took us longer than we would have liked to roll -- this out... but the reason for that was a combination of work we had to do to implement the program AND the fact that the updates we were shipping early in the year wouldn't have had as much value for existing phones.

In case it wasn't clear before, Belfiore said that the current Windows Phone 8.1 Developer Preview should not be considered to be the "final" version of the OS. He stated:

... there's client-side software fixes we're still making, when UPDATES go out to existing phones they will come with "BSP" (low-level phone firmware) updates from the OEMs... and the Services (cortana) are continually getting improved. SO.. when you get an official update or buy a new phone, it'll be more polished than what you folks have now.

On music support for Windows Phone 8.1

Belfiore said that they want to make sure that device owners have a way to subscribe to Microsoft's Xbox Music service but at the same time also allow them the option to manually sync their content. He said:

The new experience in WP8.1 Dev Preview will get us to one system that works GREAT for "ordinary sideloaders" (it works with the Windows Shell) AND for people who use multiple devices and are more "cloud-oriented". it's re-architected to handle both of these well-- and in particular we're shipping it as an app on the phone and have committed to regular updates which will make a BIG difference over the next few months. You've seen one already and more are on the way.

Lots of people have wondered why Windows Phone 8.1 now has apps for Facebook and Twitter rather than integrating those features in the OS itself, as previous version of the OS accomplished. Belfiore said that one reason was that integrated support meant that Twitter and Facebook on Windows Phone were missing many popular features that were available on other mobile apps. He also indicated that integration "limited our ability to do great international support for the key social networks around the world." He added:

So after a few releases of getting feedback that people LOVE the UX being integrated but are frustrated by the limitations… we decided to go with the app-powered model for social integration in 8.1. This approach empowers the individual services as well as individual devs. Now new social networks can be added at ANY TIME via an app update, and thus a lot of people around the world will get a feature they've missed entirely. Furthermore, by linking to the app, we have a mechanism for "deep users" to get access to "deeper features" in a nice, natural way

Many wireless carriers in the U.S and Canada insist that some phone models be exclusive to their network, and that's certainly been true of many Windows Phone products. Belfiore said the reason was that those companies are looking to sign people up to long term contracts and that having an exclusive phone helps with marketing.

In the higher-volume ecosystems, you have seen this dynamic change... iPhones and Samsung phones are typically the same device across carriers. I expect as WP usage grows and along with that as broader end-user demand begins to ALREADY EXIST in the market, the need for carriers to spend money educating people will diminish and the phones are likely to be more broadly available.

Belfiore's answers during the AMA were highly detailed and rather candid; he indicated that this won't be his last time chatting with Reddit folks.