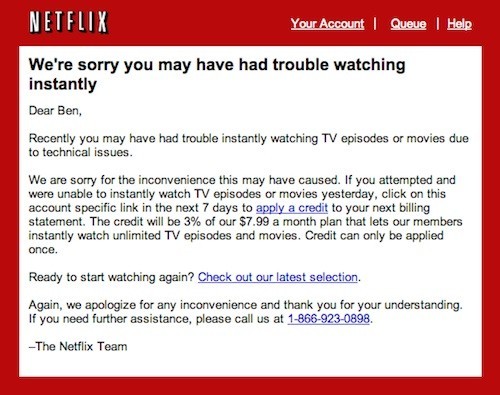 There's a reason a lot of people say that they prefer owning physical media: There is no need to worry about the service going down. As we reported on Tuesday, Netflix experienced a temporary outage to its streaming service that seemed to affect a large number of people. The outage was similar to one that occurred back in October, and just like they did back then the company is again offering a discount to customers who lost the service.

Based on the email it doesn't sound like Netflix will be refunding their customers until they click a link in the message. It's also interesting to note that instead of telling customers how much of a refund they will receive the company says they will refund "3% of our $7.99 a month plan." This equates to a credit of 24 cents on your monthly bill. Still, despite this small amount of money it is more than most providers refund for outages. When Comcast had DNS outages in late 2010, their customers received no compensation at all.

Some may question whether 24 cents is worth the trouble and whether ignoring the outage would be better for the company, but anytime a company admits a mistake and tries to make up for it in a small way it helps to build goodwill amongst their customers.