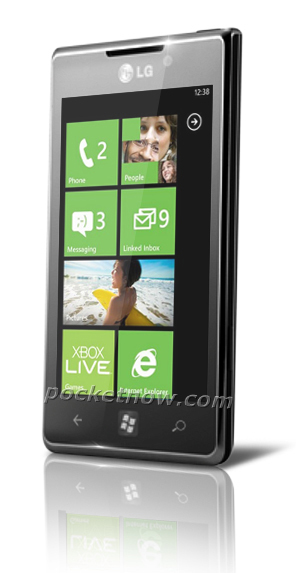 Last December, images leaked out on the Internet that seemed to confirm that LG was working on a new smartphone based on Microsoft's Windows Phone OS. Today, PocketNow.com has posted up more information about this upcoming LG smartphone. While the previous leak called the phone the LG Fantasy, it has now apparently been renamed as the LG Miracle.

The phone will reportedly have a NOVA-based four-inch WVGA display, along with a 1 GHz single core Snapdragon processor from Qualcomm, 8 GB of storage, a 720p five megapixel rear camera, and a VGA front facing camera. The article also claims that the LG Miracle might even have some kind of NFC tag-reading capabilities. That's a feature that is not supposed to be supported by Windows Phone 7.5 and there's no word on how LG will work that feature into the Miracle.

The article claims that LG will first announce the LG Miracle at the Mobile World Congress in Barcelona, Spain later in February followed by a release later this spring. This will likely be the first Windows Phone 7.5-based device released by LG following in the footsteps of companies like Samsung, HTC and of course Nokia with its Lumia line of smartphones.