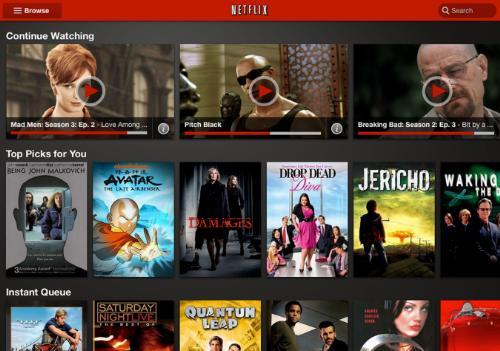 Owners of the new Kindle Fire tablet from Amazon will be able to get a new version of the Netflix streaming video app for Android-based tablets. Netflix announced today that the new app, which will also be compatible with the new Nook Tablet devices due out later this week, will display  twice as many movie and TV shows from its revamped interface compared to the original.

This new version of the Android tablet app comes as Netflix has seen a huge growth in users watching videos from its service. According to the company's chief product officer Neil Hunt, "In the last 12 months we have seen a threefold increase in how long Netflix members are watching on their tablets."

Of course, the biggest tablet on the market today continues to be Apple's iPad but owners of that device won't have to wait much longer for a new Netflix app. The company also revealed that the iPad version will get an update with the new Android user interface "in a few weeks."

Watching streaming video from tablets is certainly much better on the eyes compared to watching the same video on the smaller smartphone screens; so it stands to reason that tablets could be the best way for users to watch Netflix videos when they are traveling. We will likely see more emphasis on streaming video via tablet devices from rival services like Hulu Plus and others in the future.