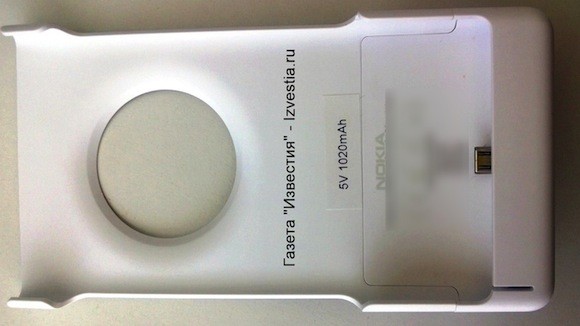 Late last week, rumors hit the Internet that the upcoming Nokia Lumia 41 megapixel camera would have a camera shell add-on as well. Today, an image of that alleged add-on has been posted on a Russian website, along with word that it will act as a charger for the phone as well.

The image, as posted on the Izvestia website, is pretty self explanatory, but the article that goes with it also claims that the camera shell will serve as a case for the phone. The device has been using the code name EOS and might either be called the Lumia 909 or the Lumia 1020, depending on which rumor is correct, when it is finally announced next week.

The camera shell case is also supposed to have a 1020 mAh battery inside, which could extend the life of the smartphone by up to 35 percent. This likely means that this case, if the rumors are true, won't be included with the EOS phone itself, unless a wireless carrier offers it as a special bundle.

The shell is supposed to have a grip for taking pictures with one hand, according to the article, along with a camera shutter button, a microUSB port and a jack so that the case can be attached to a tripod. Hopefully we will learn more about this accessory when Nokia holds its New York City press conference on Thursday, July 11th.