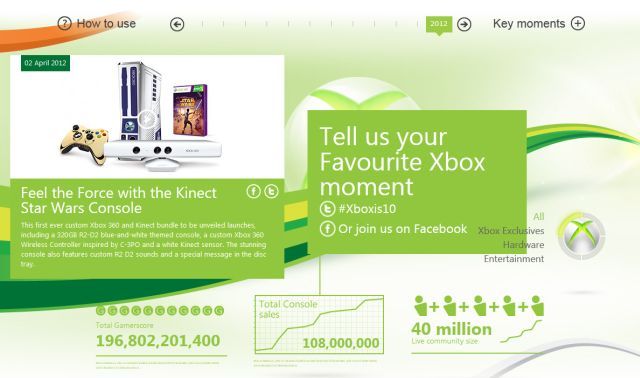 Ten years ago today, the original Xbox game console was launched in Europe by Microsoft. To celebrate the occasion, Microsoft has launched an interactive timeline web site that shows a number of the highlights from the Xbox franchise. The timeline actually starts before the original Xbox launch, when Microsoft Chairman Bill Gates first announced the Xbox concept in 2000 at the Game Developers Conference in San Francisco.

The new timeline lets users check out various highlights from both the Xbox and the Xbox 360, from the introduction of the original Halo to the launch of Xbox Live and much more. It tells us some little known facts such as when the first Xbox Live gamertag was registered and by whom (it was August 12, 2002; the gamertag was "e" and belonged to Xbox Live operations manager Eric Neustadter).

There's also some interesting Xbox and Xbox Live stats in the timeline. For example, Microsoft has sold 108 million units of the original Xbox and the Xbox 360 worldwide so far. Xbox Live has 40 million users at the moment. Finally, the timeline claims that the total amount of Gamerscore achievements for Xbox 360 users stands at over 196 billion, at least for today.

You can check out even more interesting Xbox 360 facts in our recent Trivia Tuesday post.