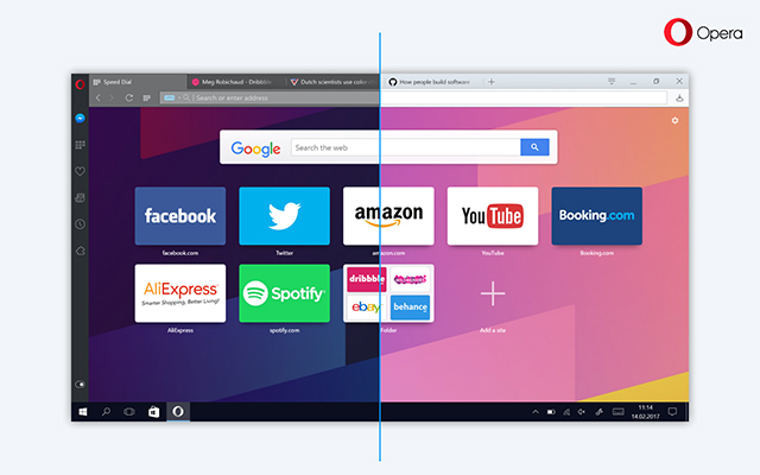 Opera has released a brand new interface for its browser, under a project named Reborn. The new UI was introduced in a developer build of the browser. The build allows developers and enthusiasts to preview the new look and test new features including new themes and an updated sidebar which will work with social services including Facebook Messenger.

In terms of appearance, Opera has received several improvements. First of all, the tabs have been made simpler, lighter and “more elegant”; this supposedly makes it easier to locate your open tabs. Speed Dial has received an updated look and it now features smooth animations. The appearance of the Speed Dial page can be customised further with two theme colours that are now included in the browser: light and dark. Three new backgrounds have also been added to complement the browser’s new look and feel.

Under the Reborn project, Opera’s sidebar has been ripped from the Speed Dial page and fixed onto the browser windows, similar to how it appears in Opera Neon. The sidebar, which has also been given new animations, gives you one-click access to important tools such as bookmarks, history, personal news and extensions. The contents of the sidebar are customisable and if you dislike it, there’s also the option to turn it off.

The sidebar will also be able to hold one-click buttons to access social features, including Facebook Messenger. In its blog post, Opera says more services are planned in the future.