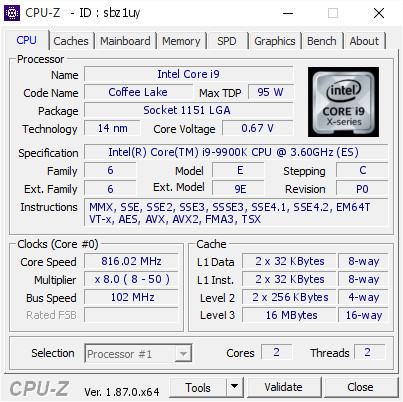 Toppc used liquid nitrogen and an MSI MPG Z390I Gaming Edge AC ITX motherboard to crank the memory frequency of the single Kingston HyperX Predator DDR4 module to the new record and far beyond its max rated frequency of 4,133MHz.

It’s highly unlikely the typical home overclocker will ever see similar results. Consider that according to the verified CPU-Z screenshots from the overclocking session, Toppc used an engineering sample Core i9-9900K CPU. Plus, Kingston disclosed that he used an unreleased sample module. Additionally, according to the CPU-Z verification data, the memory timings were dramatically relaxed, increased to 31-31-31-63-3. Meanwhile, all but two of the i9-9900K’s eight cores were disabled and the CPU was clocked at an anemic 815MHz.

The new record comes just days after ADATA set the record with a frequency of 5,583.2MHz with a stick of their XPG Spectrix D80 memory. That record was achieved on an MSI MPG XZ390i Gaming Edge AC motherboard paired with an i9-9900K CPU and coincided with the company's recent formation of its own overclocking lab, the XPG Overclocking Lab.

MSI said the record shows the company’s “dominant position on performance” and demonstrates its “unique and patented" DDR4 boost technology. "Undoubtedly, this is a revolutionary breakthrough for the Intel 9th generation processors for the first time,” according to an MSI release.

HyperX, Kingston Technology Company’s gaming division, pounced on the new world record to promote the second-quarter 2019 release of new 8GB modules that will ship in kits of two at speeds of 4,255MHz and 4,600MHz respectively.

“Our HyperX engineers continue to focus on improving high-speed yields to get faster products in the hands of our customers and push previously unattainable performance records,” the company said.