Peter Moore has left the games industry, staying true to the announcement from back in February. Moore's career has included high-profile positions in SEGA and Microsoft, but most may remember him for his almost ten-year stint at Electronic Arts, with his most recent position being the gaming giant's Chief Competition Officer. 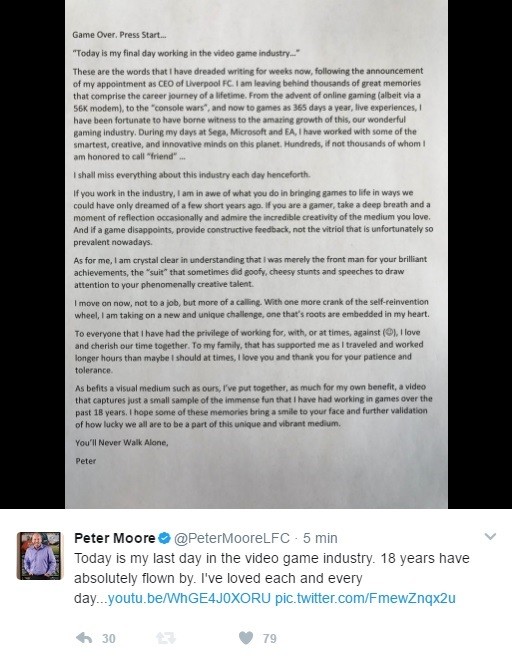 Moore signed off by tweeting out a goodbye letter (image of protected tweet via NeoGAF seen above), saying "To everyone that I have had the privilege of working for, with, or at times, against, I love and cherish our time together," to the gaming industry, as well as leaving a message for gamers stating:

"If you are a gamer, take a deep breath and a moment of reflection occasionally and admire the incredible creativity of the medium you love. And if a game disappoints, provide constructive feedback, not the vitriol that is unfortunately so prevalent nowadays."

The tweet also held a look back video, seen above, showcasing his presence at various events over the years, including images of him at the Xbox 360 announcement and hosting EA's E3 briefings.

Peter Moore's new position has him as the CEO of the Liverpool Football Club, his favorite football team.