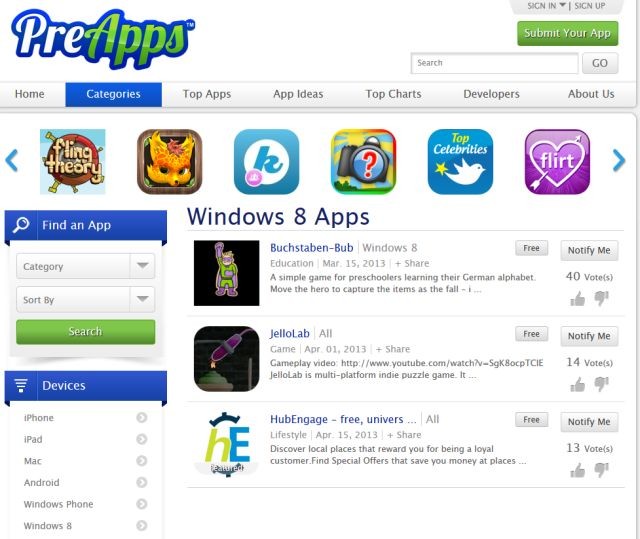 The Windows Store for Windows 8 is still well behind other app storefronts such as iOS and Android in terms of the number of apps in their catalog, and the quality of many of the apps in the store is lacking as well. Now there's word that a startup company is offering a way for Windows 8 app developers, as well as other app makers, to give public previews of their apps before they are officially released to the official storefront.

The company is called PreApps, and now Information Week reports that Microsoft has entered into a partnership with the Boston-based company that will make it easier for Windows 8 app developers to join the program. From now until April 11th, those developers will be able to get a "User Feedback" account on PreApps, which normally costs $24.99, for free. You will need a promo code which Microsoft provides via this blog post to get the free offer.

The User Feedback level lets app developers receive customer feedback for their apps, view and delete any comments, and more. PreApps has two more account levels that give app developers even more features.

PreApps CEO and founder Sean Casto stated in an interview that PreApps is the only place where app developers can get the word out on their work and receive feedback prior to its formal release "unless you have a website and money for a PR campaign." It will be interesting to see if the free offer from Microsoft will encourage Windows 8 app developers to submit their creations to PreApps.