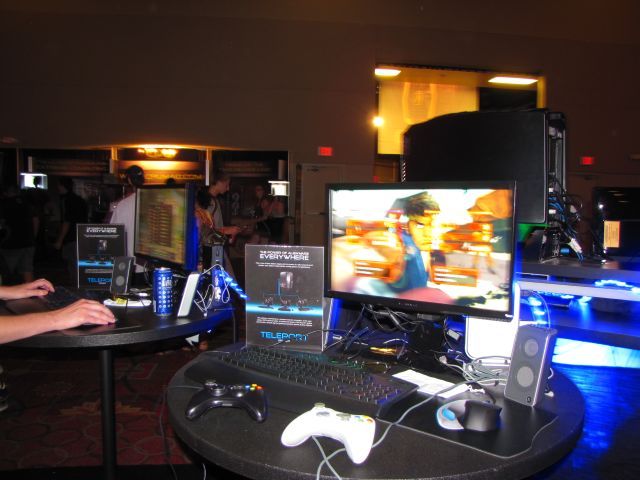 So you have bought that very expensive gaming PC. You know: the one with the multiple graphics cards, the solid state drives, the powerful multi-core processor and all of the liquid and air cooling you can get. But there's one problem; you have all that gaming hardware on your hands but it can only be play by one person at a time under most circumstances. Dell's Alienware division wants to change all that. At QuakeCon 2011 the company unveiled a new concept it was calling Teleport that allows multiple gamers to play on just one PC.

Of course the idea of having a media server at home is nothing new for things like streaming video and music files. But this is a little different. Alienware decided to use some enterprise based hardware from its parent Dell to create some small thin clients for hardware that can be connected either vie Ethernet or WiFi connections to one Alienware Area 51 gaming PC. The end result is that those thin clients can be hooked up to a monitor, keyboard and mouse and gamers can play PC titles via the main Alienware rig. At QuakeCon this was shown off when we saw Left 4 Dead 2, Street Fighter IV and League of Legends all playing at the same time via the Teleport clients connected to just one PC.

There are certainly a lot of advantages to this kind of gaming PC networking concept, not the least of which is that you can have a LAN party at home by just connecting the tiny thin clients to the PC. It means that when the time comes to upgrade your gaming rig you are only updating one PC instead of four. All your gaming PC titles and other applications only need to be updated once. You can also set up specific gaming profiles for each game client. In short you could have a cloud-based gaming network in your own home with the Teleport concept.

The Alienware reps told us today that it was hoping that the thin client hardware needed to make Teleport work would be sold for between $100 and $200. However, they also made it clear that this was just a concept right now. There's no word on when this kind of set up will be sold, if it is sold at all by Alienware. Still, it's an intriguing design for allowing PC gamers to have a home LAN set up that doesn't require buying four full fledged gaming PC rigs. Hopefully we will learn more about this idea soon.