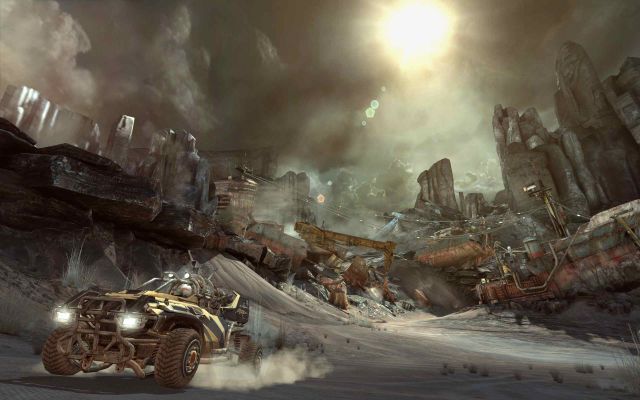 In 2004, id Software released its last in-studio game, Doom 3, for Activision. While there have been other expansion packs and games based on id’s properties that have been released since then all of them were developed by third party studios (Splash Damage on Enemy Territory: Quake Wars and Raven on the last Wolfenstein game, for example).  Needless to say it’s been a long wait for id to finally release its next game (and the first under its owners Bethesda Softworks which acquired id in 2009). That game is Rage, which is also the first original game id has made since the first Quake game came out in 1996. At QuakeCon 2011 we got a chance to play through the first portion of the title for about 90 minutes.

This game, while still a first person shooter, is unlike any game that id has produced. It’s not a corridor-based shooter and there are lots of non-shooter game design elements in Rage as well. In many cases it feels more like an RPG than a first person shooter with a non-linear campaign containing side quests, collecting items and storing them in your inventory and making items via recipes.  And yes, there’s even  some vehicle driving.

Our hands-on demo began by watching a brief CGI sequence where we see a massive asteroid colliding with the Earth in the near future. A set of people, including your unnamed character, are seen going into some kind of stasis chamber just before the big rock hits. Cue the transition to the in-game engine as we see everything from your perspective. It’s apparently 100 years later and the stasis chamber is now letting you out after some sort of malfunction. You get out and then head to the surface to see the blasted landscape of what was a major metropolitan area. Buildings are wrecked, freeways are smashed and broken … you get the idea. It’s a post-asteroid world and you have to deal with it.

id Software knows that players like to get into the game quickly so it doesn’t waste any time before your character is attacked by a couple of post-asteroid mutants. Luckily you are saved by a human local who has seen people like yourself before. He quickly gets you to enter his buggy and then we travel through some canyons to arrive at his place; a former gas station.

It’s then that the game truly begins as you are sent on missions and quests by the various friendly people of this world. One may want you to pick up some medical supplies while another may send you out to fix a structure on top of a hill. Or you may just get a mission to kill some mutants. The non-linear quest system means you can either accept or decline these missions and even if you accept them you can switch between active quests if you want. 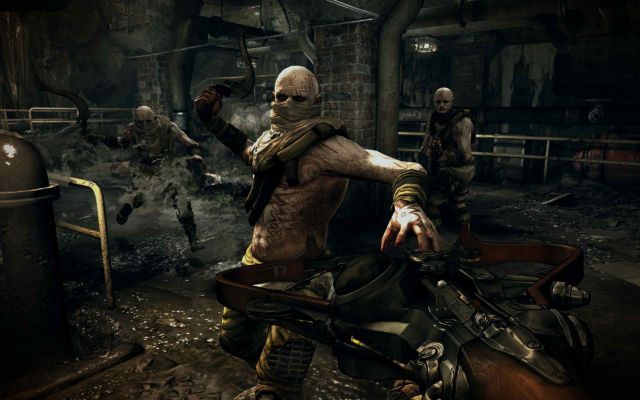 To aid you in your quests you have to use some weapons. Since we played the early portion of Rage we only got to use some of the underpowered items of destruction like the pistol and the close range shotgun. However, weapons can be upgraded with better ammo. The pistol, for example, can be outfitted with Fat Boy slugs that can take enemies out in one or two shots. You can even buy and use the game’s deadly version of a boomerang that can chop off the heads of others.

You pretty much want to collect the piles of junk that you are allowed to grab as you go along in the game. Even things like empty beer bottles can be used to trade with a local merchant in exchange for money. Money then can be used to purchase new items and weapons if available. You also want to check the enemies that you kill have to see if they have any money or weapons ammo that you can collect and use.

Speaking of the enemies in Rage, the early portion of the game shows the mutants in full force.  Some are more human like in their AI behavior as they shoot at you and take some cover if you shoot them back, especially from a distance. Other mutants are more animal than human. They will charge at you and even perform some aerobatic maneuvers that make it hard to shoot them from a distance before they get in your face.

The game also allows you to collect recipes that let you make items that you need such as bandages, which stop health loss after you get shot or hurt a lot in the game. It’s simply a matter of if you own a recipe and then if you have the recipe’s required items and parts in your inventory you can make new bandages or other things that might come in handy.

We played the game on a PC rig and visually the PC version of Rage is a treat to look at for the most part. id Software’s id Tech 5 engine renders both indoor and outdoor areas very well. Some of the game’s textures can be a bit blurry at times if your character moves his head quickly to look at an object but they snap back into focus within a split second. Character models and animation in the game looks good and the voice acting is on par with what you might expect in a game.

While the design team at id has done a good job in making sure you are immersed in this dirty and nasty game world we do wish that some of the quests were a bit less repetitious. In our brief time in the early portion of Rage we were sent out to accomplish one mission only to find that we needed to complete another mission to get the items to complete the original quest. Also you sometimes have to go through some of the same areas twice in the early parts of the game and even kill some of the same enemies to make it through some of the quests. We suspect that the later portions of Rage might have more variety in both locations and quests. The early parts of the game might just serve as an extended tutorial to make sure you learn how the game’s design is supposed to work.

Rage is looking like it will be a fairly massive game to play through in single player and we haven’t even played the game’s vehicle based multiplayer modes yet. While id games in the past have mostly been about looking good while shooting enemies, Rage represents a new direction for the company to really add new storyline and gameplay elements. While we have seen some of these elements before in other first person shooter games, particularly in Gearbox Software’s excellent 2009 title Borderlands, it’s the execution of these designs that ultimately matter. At the moment the jury is still out on whether the final version of Rage will come together to make this mix of first person shooter and RPG elements work. We will get the final verdict on that score when the game is released on the PC, Xbox 360 and PS3 on October 4.