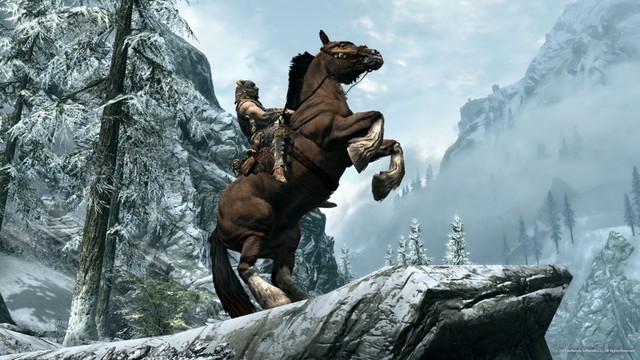 The ballroom at the Hilton Anatole hotel in Dallas, Texas was filled to capacity on Friday as gamers got to see the first ever live public demo for The Elder Scrolls V Skyrim. The demo for the upcoming RPG from developer Bethesda Games Studios was controlled by its director Todd Howard. While the game was running on an Xbox 360 console (playing a public demo on a console controller is easier than doing it on a PC keyboard and mouse set up) Howard assured the huge (and at times almost bloodthirsty) crowd that the PC version looks even better.

The first part of the demo just showed off the game's outside environments. The engine made even blades of grass highly detailed as the player character walked through the fantasy land of Skyrim. It's one of the most realistic and beautiful games we have ever seen. We also got to see a little of the game's combat as Howard attacked a couple of unlucky stray NPCs. You can duel weild melee weapons or hold a sword in one hand and a shield in the other. You can also dual weld magic spells as well and create combos to make even more powerful magic attacks.

The demo then lets you explore a small village where you could speak to various NPC. Howard said you could just stay in the village and take up jobs for extra money, such as running the local wood mill. Then the main character jumped on a horse and started to ride up into the snowy mountains. It was there that we encountered Skyrim's big boss enemies, the dragons. These creatures come in multiple forms (we saw a fire and a frost dragon in our demo) and they can fly and pick you and other NPCs up and fly around and drop you along with their breath attacks.

The player character managed to get inside a mountain based cavern to avoid the dragons where he then proceeded to take out a variety of enemies inside, from zombies via fire spells and a big troll like enemy as well. Howard also took some time to show off the game's interface. One feature lets you examine your inventory items in full 3D detail. In one case the character picked up a golden claw that acted like a key to enter into another part of the dungeon. However you have to solve a puzzle in addition to putting the key in the door slot. But if you look at the claw in the 3D inventory mode you can see the solution to the door puzzle is on the claw itself.

Howard also showed off another aspect of the game, the shout. These are basically very large scale magic spells that the character can use. You learn them via reading the dragon language at various points in the game. Using shouts turned out to be handy as we neared the end of the demo and encountered even more dragons to fight. The player character used a shout that created a huge thunderstorm with the lighting generated by the storm used to help defeat a frost dragon.

At the end of the demo Howard revealed that The Elder Scrolls V Skyrim would be getting a Collector's Edition. In addition to the game this $149.99 Collectors Edition adds a full map of the game world, a behind-the-scenes DVD, a 200 page art book and a one foot tall PVC statue of the biggest boss dragon, Alduin, the World Eater.

Even though we only saw The Elder Scrolls V Skyrim for just a few minutes it's clear that Bethesda Game Studios is going all out to make this latest game in this long running RPG series the best yet. From the incredible graphics to the freedom of gameplay to the deep spell and shout system and, well, the cool dragons, this will certainly be one of the most anticipated games of 2011. It's going to feel like a long wait until the game ships for the PC, Xbox 360 and PS3 on November 11 (11:11:11).