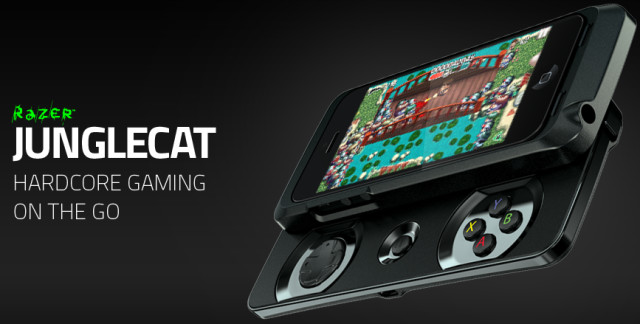 Razer, a leading manufacturer of gaming accessories has announced its iOS gamepad, the Junglecat. The device is iOS compatible, but the case is exclusively designed for the iPhone 5 and 5S. This device caters to gamers that are obsessed with precision control.

The Razer Jungelcat employs a unique slider design that unveils the gaming control pad and buttons. The game controller will have its own iOS app that will allow customizations. Some of the customizations include the ability to remap / define the functions of each button and adjusting pressure sensitivity for each button. The companion iOS app will also allow for up to 20 personalized profiles, which can be paired to corresponding games.

Measuring in at 18mm, the Junglecat does add a bit of thickness but can also act as a protective case. The controller is designed around the iPhone allowing access to all of the existing ports. It is also a MFi product, meaning that it has Apple's blessing and will play nice with all compatible Apple products like the iPad, iPod, and Apple TV.

Razer will be exhibiting at E3 2014 in Los Angeles where we hope to get our hands on it for some real world testing.

The Razer Jungelcat retails for $99 USD and is available now.