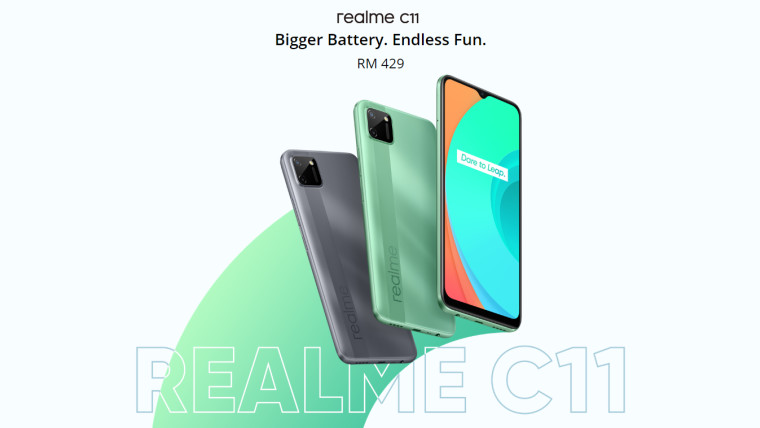 Realme is gearing up to launch a new budget smartphone in India. The smartphone in question is the Realme C11, which has already launched in Malaysia. The Realme C11 is available in Malaysia with a price tag of MYR 429, going by rough conversion, the device could cost Rs 7,500 in India. Buyers can choose from two colors options – Mint Green and Pepper Grey.

As per the press release, the Realme C11 India launch will take place on July 14 at 1:00PM IST. The virtual event will be hosted on Realme’s social media channels on YouTube, Facebook, and Twitter.

The realme C series is making a return with #realmeC11 featuring a #BiggerBatteryLargerDisplay.
Get ready for uncompromised entertainment!

Speaking of features, the smartphone’s highlights include dual-cameras at the back, and a 5,000mAh battery. Other specifications include a 6.5-inch HD+ (1600x720 pixels) display with waterdrop-style notch and 20:9 aspect ratio. Under the hood is a MediaTek Helio G35 octa-core SoC paired with 2GB of RAM. For storage, there is 32GB of expandable internal memory on offer.

For photography, the smartphone features a dual-camera setup at the back. This includes a 13-megapixel f/2.2 primary sensor and a 2-megapixel f/2.4 portrait sensor. For selfies and video calls, there is a 5-megapixel sensor up front with f/2.4 aperture.

Powering the device is a 5,000mAh battery that Realme says can offer up to 31.9 hours of talktime on a single charge. For connectivity, the device features dual-SIM card slots, a micro-USB port, and a 3.5mm audio jack. On the software front, the device runs Android 10 with Realme’s UI on top.