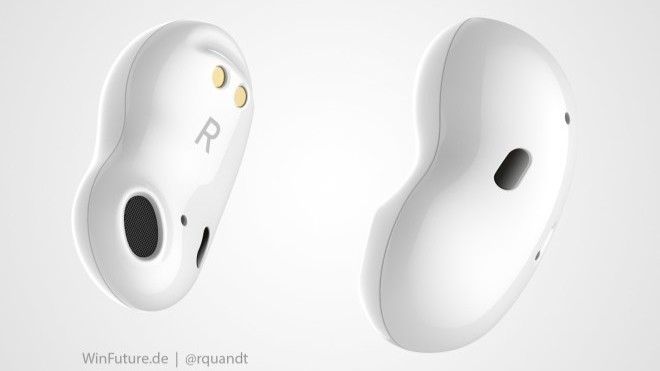 Samsung's existing wireless earbuds such as the Galaxy Buds embrace a design that makes them protrude from the ears, just like most other in-ear earphones available on the market today. This could change in a future iteration of the device, with a fresh rumor claiming that Samsung may be working on next-gen Galaxy Buds with radical changes in terms of design.

3D images of the earphones, courtesy of Winfuture, show a pair of Galaxy Buds that take on the shape of a bean. It's remarkably unlike anything earphone makers have produced before, so it's interesting to see how this revamped look would work ergonomically. Aptly codenamed "beans," the earphones are reportedly 2.8cm long with their top portion resting vertically in the upper area of the ears while the speaker area will protrude into the ear canal. This is supposedly intended to make the earphones more compact with slightly less protrusion from the ear. The rumor also claims the new Galaxy Buds could be integrated with two speakers presumably for treble and mids or lows, plus an outside channel similar to that of a subwoofer that's claimed to help improve sound quality. There's a noticeable lack of silicone attachments, however, suggesting the absence of a background noise-canceling feature.

That said, the design could take on a lot of changes in the future as it's still in the development stage as part of the Engineering Validation Testing (EVT1) process. The report also claims Samsung might unveil the next-gen model sometime in the summer or autumn alongside the Galaxy Note 20 series.