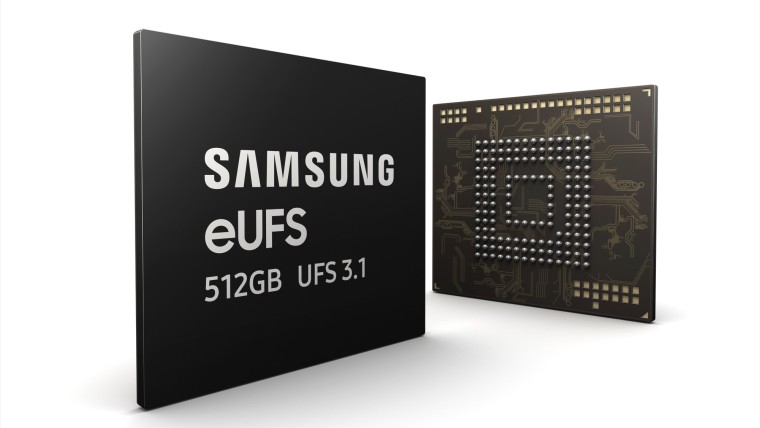 Samsung today announced that it has started the mass production of the industry's first 512GB eUFS 3.1 storage chip meant for use in flagship smartphones which it claims is the fastest storage solution for them. Compared to existing eUFS 3.0 storage chips, the new eUFS 3.1 chip from the company offers three times faster write speeds.

Samsung claims the storage chip has a sequential write speed of over 1,200MB/s. Its random performance is up to 60% faster than UFS 3.0 storage chips used in existing flagship smartphones. It also offers 100,000 IOPS for reads and 70,000 IOPS for writes. The sequential read performance of the chip remains the same as its predecessor at 2,100MB/s. The numbers make the chip notably faster than SATA III based SSDs for PCs and other existing storage solutions for smartphones.

“With our introduction of the fastest mobile storage, smartphone users will no longer have to worry about the bottleneck they face with conventional storage cards,” said Cheol Choi, executive vice president of Memory Sales & Marketing at Samsung Electronics. “The new eUFS 3.1 reflects our continuing commitment to supporting the rapidly increasing demands from global smartphone makers this year.”

Samsung claims that phones with eUFS 3.1 chip can move 100GB of data in about 1.5 minutes, while a smartphone with UFS 3.0 chip will require more than four minutes for the same operation. Later this year, the company plans on launching 128GB and 256GB capacities of the eUFS 3.1 chip for premium smartphones.

With Samsung starting the trend of offering 8K video recording on smartphones with the Galaxy S20 series, other Chinese OEMs are also expected to follow suit. This also necessitates faster storage solutions which Samsung is hoping to fulfill with its eUFS 3.1 chips.