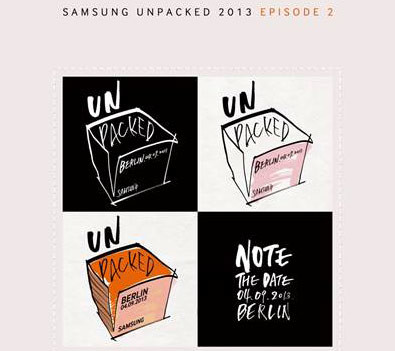 Samsung is getting ready to reveal its next major smartphone product and, based on the invite they sent out to select media outlets today, the reveal will almost certainly center on the next version of the Galaxy Note, the smartphones with such huge screens that they are now being called "phablets" by some in the press.

As reported by Engadget, the second Samsung Unpacked press event of this year will be held on Sept. 4 in Berlin, Germany. The invite states that the media should "note the date," a clear reference to a full reveal of the Galaxy Note III.

The same report that included the leaked prototype images also claimed that the smartphone will have either an Octa-Core or Snapdragon 800 processor, a 13-megapixel camera, and the newest Android 4.3 operating system. The next Galaxy Note is also expected to include the S Pen stylus for drawing and other software uses.