Google began its rollout of Android 6.0 Marshmallow in early October, but since then, the newest version of the OS has made its way to just 2.3% of active Android devices. That stands in stark contrast with Apple's progress in updating its mobile devices to the latest version of its operating system.

Apple released iOS 9 just three weeks earlier than Marshmallow, but by mid-January, over 75% of iOS devices were running that version. According to Apple's latest platform stats, that amount has since grown to 79%. 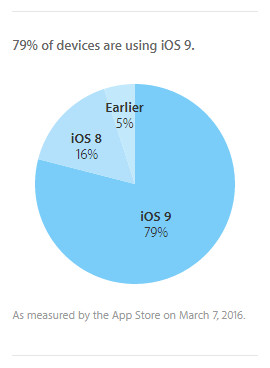 Clearly, the rate of iOS 9's progress has slowed over the last two months, but even that slowed rate has vastly outpaced that of Google and its partners, who continue to struggle in keeping their Android devices up-to-date.

Indeed, Android updates seem to be getting worse in terms of how quickly they're released; five months after the last major version - Android 5.x Lollipop - began its rollout, it had already reached 5.4% of devices, more than twice the percentage that Marshmallow achieved over the same period.