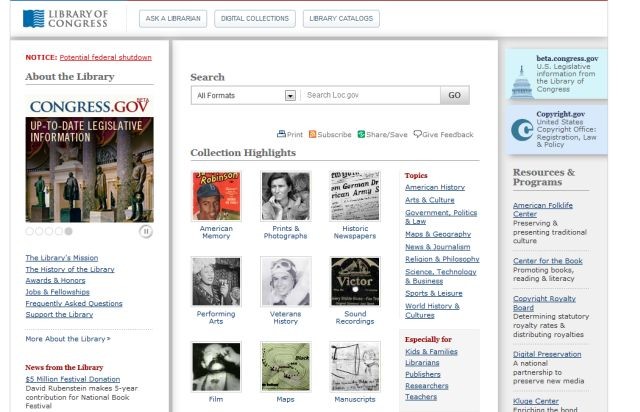 The Library of Congress website could go offline on Tuesday.

The current battle in the U.S. Congress over whether or not to approve the government's budget for the next fiscal year is coming to a head and everything points to a shut down of much of the federal agencies on Tuesday. If that happens, Internet users can expect to see a number of websites go offline or simply offer a splash page with a note saying their services are currently down.

Venture Beat reports that the known sites in danger of being shut down due to lack of funds include the Library of Congress, the Federal Trade Commission and the National Park Service. Those sites allegedly need some kind of staff to keep operating certain services, although it's also likely that it's purely a political move to make the shutdown as painful as possible for Americans. Other sites such as the Department of Veteran Affairs will stay online, but with a smaller team that will make fewer updates.

The good news, at least for some people, is that the closing of government services could also impact the National Security Agency. That means the NSA could stop its current gathering of online information, which would likely please the many people who don't care for such activities.